June 18, 2012 Hornillos del Camino, Spain - Population: 70 I am in a one street town. Every building looks the same and every object is the exact same color. Cream. Egg shell, maybe. American pop music is playing from the bar while people are eating, drinking, and enjoying the feeling that there is absolutely nothing to do but sleep or dream or meet new friends from all over the world. Every moment a piazza. There is an old man dressed like a traditional pilgrim, an attractive young German couple, and a tan man in tight shorts with a cowboy hat. Some older ladies are sitting against a wall on thin rubber mats and an Asian man just walked by in bright yellow crocs. I see a young shirtless Spaniard in pink sunglasses sunning his self against a window frame. Smokers and postcard writers are outside while people tend blisters and still that goddamn Katy Perry is blasting from the bar while I read a book and drift back to New York and wonder if I will sit here for what seems like forever and a day and then the albergue (hostel) has “No Vacancy!” and pilgrims are exhausted so they buy large consoling beers and ask to use the public phone to call nearby villages and people wander in and out of the church–some amazed–but most just needing eye candy and inside the albergue lie the loners and an Italian couple who sit in the kitchen discussing their guidebook as well as their future together and then hold hands and walk to the only store in town to buy cheap, hard, white bread along with cheese that was produced “only eight kilometers away!”

and the shop owner is so proud of his goods and then people shower and wait for dinner and sleep again soon after–at 9pm–while the sun is still shining–only to get up and walk for a thousand and one and then a thousand more steps just to pry off toenails, open old scabs, and snack on stale fruit and I am surrounded by so many languages and the church bell rings and everyone jumps and the town is still a single color and dinner is bland and the waitress is rude when I try to pronounce “Jugo de Piña” and all I want is some vodka with the juice but I don’t but I do so I don’t and I peel an orange with the knife in my pocket which makes me feel wild or something stupid and I think about this morning and being alone and daydreaming of killing the mean dogs who almost attacked me and my heart is ecstatic but my feet hurt and my throat hurts and my head knows I’ll be doing this for three more weeks and I wonder if it will be boring or wonderful or change or God, please, let me make it.

In the summers of 2012/13 I walked over 1,000 miles on the Camino de Santiago: an ancient Christian pilgrimage through southern France and northern Spain. The Camino has many branches throughout Europe but I took two of the most popular trails: The Le Puy Camino (in 2013) which ends at the start of the Camino Frances, which I walked in 2012. The routes bring together an international community on a path that covers cities, mountains, and Roman roads. Over one hundred thousand people make the journey each year to visit the remains of Saint James, one of the Twelve Apostles of Jesus Christ, enshrined beneath the cathedral in Santiago de Compostela.

“Portrait of a Pilgrim” captures my personal experience and shares the stories of pilgrims, albergues, clergy members, and other characters of the Camino to explore how an ancient tradition is thriving in a modern world.

Although the Camino is rooted in Christian tradition, over the past fifteen years it has been reborn as a nondenominational spiritual rite. In 2012 only 30% of pilgrims were walking in the name of Christian faith. Many people who walk do so because they are in a time of transition; recently retired, just out of college, lost a job, went through a divorce, or are simply unhappy and need a space with strangers to decompress. Surprisingly, many pilgrims begin the journey alone.

There is a spirit of community on the Camino that connects everyone walking. Within days you will have walked with, talked to, and had dinner with many of your fellow pilgrims. Even if you begin alone it will take less than a week to be surrounded by new friends from all corners of the globe.

Rob, a pastor I met while walking in the Aubrac region of France, describes the “language people use to speak about the Camino” as the same they use when “speaking about God.” Often in conversation you will hear people say “The Camino will show me the way, I came to the Camino to find myself or to solve this problem.” Some see it as a return to childhood because there is room to reflect without responsibility. Although the Camino has become more commercial in recent years I have limited my perspective to sharing photographs that elevate the experience to the idyllic spiritual place pilgrims find while on the way. 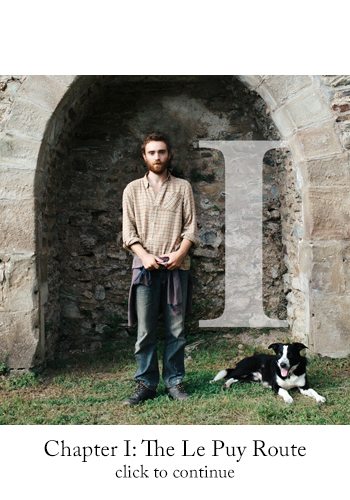